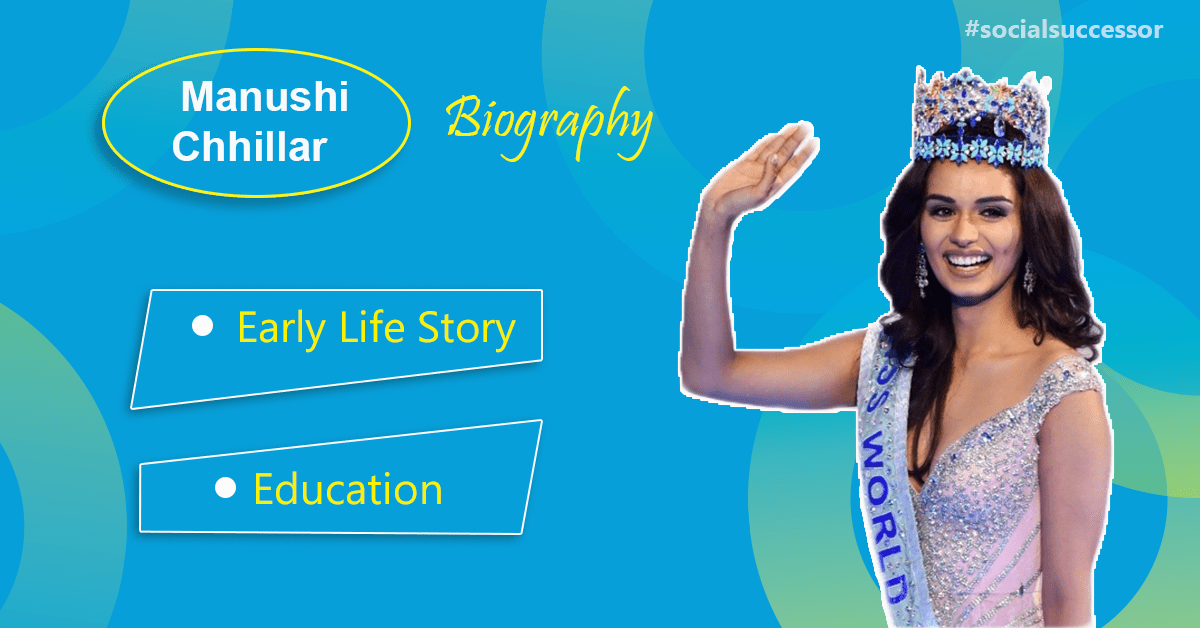 Manushi Chillar is known as an Indian actress, model and the winner of the Miss World of 2017 pageant. Therefore to understand all the aspects that are connected with her life then the Manushi Chhillar biography is the best option to understand her journey. However, all these things are quite visible which are helping in showing her achievements.

Through her biography, you all will get to know her life journey in an elaborated manner as it covers all the important things. Apart from this, you will also know her backstory as what all happened in her life. The way she has achieved so many things which are very motivating for people as they can relate to her life journey.

The most important part begins with knowing Manushi Chhillar early life story in detail. She was born on 14th May 1997 in Bamnoni village of Jhajjar district into a Haryanvi family. Her father, Dr Mitra Basu Chhillar is indulged in the profession of a physician and a scientist at the Defence Research and Development Organisation (DRDO). Apart from this her mother Dr Neelam Chhillar is into the profession of doctor and she is the head of neurochemistry at the Institute of Human Behaviour and Allied Sciences.

Moreover, she has one brother whose name is Dalmitra Chhillar and one sister whose name is Dewangna Chhillar and she is pursuing an LLB. Manushi has done her schooling at St. Thomas school which is in New Delhi. More importantly, she was the All India CBSE Topper in the subject of English in her 12th standard. Not only this she has also secured 96% in her board exams.

Besides this, she has passed the All India Pre Medical Test which is now known as NEET in her first attempt only which is a very big deal. Manushi was pursuing her medical degree (MBBS) at the Bhagat Phool Singh Medical College which is in Sonipat. In addition, she is fluent in the languages like English, Hindi and Haryanvi as this language is her mother tongue. She has also done the training in the Kuchipudi dance form by the Raja and Radha Reddy. Although this section has a lot of importance in Manushi Chhillar biography as it gives a lot of valuable information.

It’s time to discuss Manushi Chhillar career in proper detail. During her school and college days, she has always taken the interest in modelling. Due to this reason, she used to participate in competitions of modelling also. More importantly, in 2014 she has got the chance to represent India in a programme of Culture Exchange which is held in the country of Japan. But through this competition, she has crowned the Miss Photogenic title in the sub-contests.

Thus one of the major events happened on 18th November 2017 when she won the completion of Miss World 2017 and she was crowned by Miss World 2016 Puerto Rico’s Stephanie Del Valle. And so, winning this title is a very big achievement for her because she has done so much hard work to reach over there. Thus Manushi became the 6th Indian woman to win the Miss World title. This section is very prominent in Manushi Chhillar biography as it highlights her career journey.

Even though she is such a famous personality but she has taken interest in supporting the important issues. Now you will learn about Manushi Chhillar involvement in social work which is a very good thing. She was crowned with the title of Beauty with a Purpose which was conducted by Project Shakti. Project Shakti was a campaign that occurs to bring awareness to the topic of Menstrual Hygiene. Most importantly, Manushi is a strong advocate for vegetarianism and she has used various platforms to express her views on this topic. Besides this, Manushi appoints as the ambassador for the government of Haryana’s campaign to control Anaemia, as 61 per cent of the women in the state were suffering from this disease.

Apart from this, she collaborates with UNICEF’s campaign, which takes place to raise awareness of the coronavirus pandemic. Furthermore, Manushi’s presence can be seen as urging people to stay at home for their protection. She has even collaborated with the campaign launched by Adidas which they have named Make a Move. Moreover, through this campaign, she wants to encourage and motivate women to overcome social and psychological barriers.

It’s time to know the details regarding Manushi Chillar acting career. And so, she is going to make her debut with the Yash Raj Films’ project, Prithviraj which will direct by Chandraprakash Dwivedi. Furthermore, the film is completely based on Prithviraj Raso, which is an epic poem. It composes in Braj Bhasha language and it depicts the entire life of Prithviraj Chauhan who is a Rajput king and he belonged to the Chahamana dynasty.

All the Manushi Chhillar controversy happened when she has just won the Miss World title. However, it began when the politician Shashi Tharoor had tweeted the statement that the BJP’s decision of demonetisation has had such an impact in India that our “Chillar” also became Miss World. Besides this, in response to that Manushi decided to ignore all these things and after that, the politician all accepted his mistake.

2018 Honoured by the Parliament of Brazil-Humanitarian Works

Thus Manushi Chhillar biography provides ample information to know all the things that associates with her life. Moreover she has achieved the title of Miss World she is still focusing on so many important issues which can bring a change in society. Furthermore, all these issues need attention and her contribution is highly valuable. Due to this reason, all these things show her good personality and her clear vision which can benefit society to such a large extent.