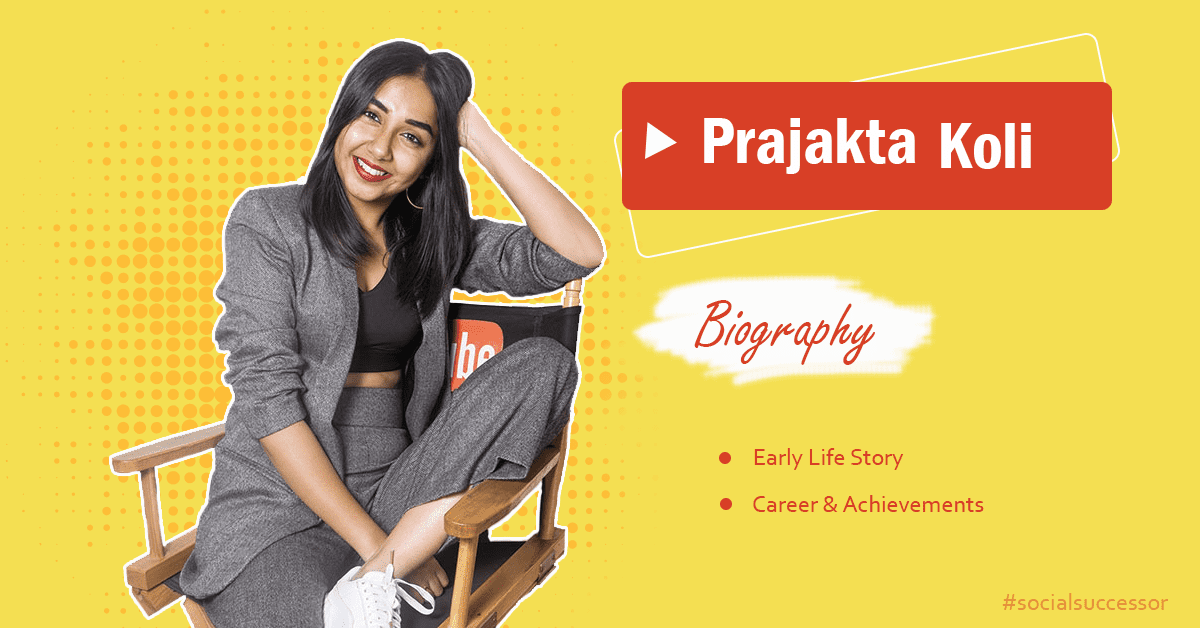 Prajakta Koli is one of the popular YouTubers and she has established her own YouTube Channel which she titled Mostly sane. More importantly to acquire all the essential details then you must go for Prajakta Koli biography which highlights her entire journey.

The biography covers all the chapters that are highly centred on her life and covered all the important events. When you go through her biography you will get to know the abundance of information. From being a common girl to becoming a YouTube sensation Prajakta has come a very long way. The way she creates funny videos is very different. Apart from this, the main speciality of those videos is that they are highly based on real-life instances. Due to this reason, her videos are very authentic and she is getting a lot of love from her followers.

The initial step begins with knowing Prajakta Koli early life story as it will focus on her background journey. She was born on 27th June 1993 in Thane. Her father Manoj Kohli is indulged in the profession of a real-estate businessman and after then he turned into a restaurateur. Her mother Archana Koli is in the profession of phonetics and language teacher.

Prajakta is the only child of her parents and she doesn’t have any siblings. During her childhood days, she loved to listen to the radio because of her liking. After then she decided to become a radio Jockey when she was in her 6th standard. She has completed her schooling at Vasant Vihar High School in Thane. For the completion of her higher studies, she has done the graduation in Bachelor of Media from V.G. Vaze College of Arts, Science and Commerce in Mulund, which is affiliated with the University of Mumbai.

Education- Graduation in Bachelors of Media

The start of Prajakta Koli career happened when she joined the radio channel Fever 104. She has joined the radio channel as an intern after the exams of her final year. While doing the job she has realized a lot of work pressure but she didn’t quit the job. More importantly during her internship days, she got the golden chance to meet prominent Bollywood celebrities like Hrithik Roshan, Ayushmann Khurrana etc.

Besides this, her meeting with Hrithik Roshan was very prominent as she came to the notice of Sudeep Lahiri as he was also there. He insisted Prajakta to commence with her YouTube Channel as he saw her potential in creating funny videos. Another thing happened when she has got her very first show ‘’Call Centre’’ as a radio jockey. but the show didn’t show any good response and it turned out to be a flop.

She has started her YouTube Channel in February 2015 and the name of her YouTube Channel is‘ MostlySane’. She has made her YouTube video debut with a monologue ‘Five Types of Singles on Valentine’s Day. One of her videos named Hilarious Words Delhi People Use went viral in June 2015. Due to this reason, people are liking her videos so much then Prajakta began uploading three videos per week. It includes ‘Real Talk Tuesday’, Comedy Video on Thursday and ‘Sawaal Saturday’.

In the year 2020, she has started her series ‘Pretty Fit’ on her channel and in this series, there are many popular celebrities like Kareena Kapoor, Neha Kakkar etc. She has gained 6 million subscribers on her YouTube Channel. She has appeared in several music videos like Shameless, No Offence etc. Thus in the Prajakta Koli biography the phase of her career carries a lot of weightage.

One of the important part is to know more about Prajakta Koli acting career in detail. She has featured in a short film named Khayali Pulao which deals with female empowerment in rural Haryana. More importantly, she had acted in one of the Netflix series Mismatched, which was released in November 2020. Besides this, she will also be making her Bollywood debut with Dharma Productions’ upcoming film Jug Jugg Jeeyo which is a very big deal.

Prajakta Koli is famous because of the funny reels that she is creating and she has 4.8 million followers on Instagram

The list of Prajakta Koli achievements is quite long and it seems to be a very important column in Prajakta Koli biography as she has achieved so many accolades on her own.

Outlook Business – Women of Worth (WoW)

Economic Times – Game changer in the Field of Entertainment

Even though Prajakta has become a popular star but here you will get to know about Prajakta Koli involvement in social work in different fields. She has launched her campaign #iPledgeToBeMe on World Mental Health Day in 2016. Through the launch of this campaign, she wanted to address the matters that deal with mental health, body shaming etc. Due to this reason, she has shared her own experience which is related to body shaming. Prajakta has written a rap song that will highlight her pain. She was also part of the campaign #GirlsCount which took place in 2018. The campaign is mainly focused on highlighting the importance of girls’ education.

Prajakta has even travelled to the UN Headquarters in New York in September 2019 where she was a delegate. Thus she got the chance to participate in the International Day of Tolerance and for the Goalkeepers program which seemed to be an initiative by the Bill and Melinda Gates Foundation, For one of the special episodes of Creators for Change which took place in 2020. Prajakta and two other YouTube creators had interviewed girls who are living in different countries. During the interview, they discussed the opportunities for getting an education.

Therefore Prajakta Koli biography proves to be a very good source of motivation for the youth to look after her journey. She has started on her own and created her own way to reach the milestone of her career. Now she became a role model for so many women. All these things are achieved by her because of her hard work and dedication.