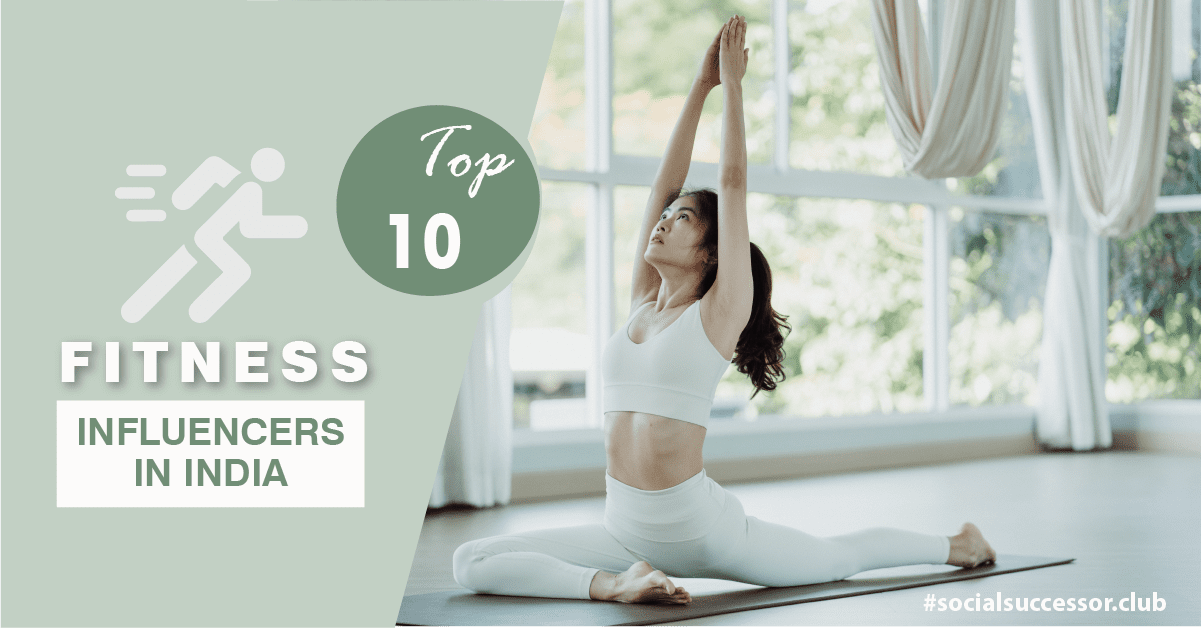 The fitness influencers have a lot of credibility as the content that they shared on their social media is very authentic which is the best thing Thus, their followers also appreciate their workout videos and the product recommendations given by them. Many fitness influencers have specialized in different aspects like weight loss and the advantages of yoga, which lead a healthy life. Due to this reason, the engagement rate on their social media accounts is very high as many people have to wish to look like them. Besides this, their followers are so inspired by them that they even follow their exercises routine and even dress like them.

Due to all these reasons, these influencers are becoming role models for many people as they want to do things that they follow in their fitness. In today’s time, it is very important for everyone to be healthy and fit and these fitness influencers are contributing a lot in the field of fitness and spreading the message to be fit with the world. All these things make people more aware about the fitness and people also start doing those activities which will make them fit and healthy. This means that they are as powerful as they are able to reach out to so many people.

Here are the Top 10 Fitness Influencers in India who are motivating people to follow the right steps of fitness to lead a healthy life.

Sahil Khan was born on 5th November 1976 in Kolkata. He is best known for increasing fitness awareness, and he is the owner of the gym, which name is Life Fitness India.

Sahil has the best physique and he is setting high standards in representing the Indian Sports and wellness industry. Therefore, he has won several awards in the field of fitness.

Sahil Khan has a huge fan base and he has 10.3 million followers on Instagram

Sangram Chougule was born on 28 December, 1979 in Kolhapur. He is a professional bodybuilder and a fitness model. He is so dedicated to his fitness that he has started the gym within his school days.

Sangram gained massive popularity when he won the prestigious titles of Mr India and Mr Universe title in 2012 and 2014. As a result of his hard work he has won many competitions and gained popularity on his social media accounts.

Sangram Chougule is a powerful personality and he has 1.4 million followers on Instagram

Prince Narula was born on 24th November 1990 in Chandigarh. He is a well–known fitness influencer as he always does fitness and strength training. Due to this reason, he manages to inspire his followers towards fitness and encourage them to have a fitness routine in their life, which will benefit them in so many ways.

Prince is highly dedicated to his regular fitness sessions as he is such a powerful fitness influencers in India as he uses his social media accounts to spread awareness on fitness. He has also won many realities shows like Bigg Boss (Season 9), and Roadies (Season 12). He is the brand ambassador of Dreamz Production House.

Bani J was born on 29th November 1987 in Chandigarh. She is an actor and fitness model. Furthermore she is also a fitness freak individual and the way she has transformed herself is incredible.

Therefore, her journey makes her a strong fitness influencers in India and becomes the source of motivation for so many people out there. Furthermore, she also posts videos on fitness, which are liked by her fans. Bani has a huge fan base due to which brands like Puma ls to do the collaborations.

Bani J is a popular social media icon and she has 1.5 million followers on Instagram

Namrata Purohit was born on 24th August 1993 in Mumbai. She is known as a Pilates instructor. She is the co-founder of the Pilates studio which is also associated with her father.

More importantly, she has become one of the youngest and most certified Pilates’s instructors globally, which is a massive achievement for a woman like her who has reached these acknowledgements. Namrata has also trained Bollywood celebrities which includes Jacqueline Fernandez, Varun Dhawan and many more.

Yasmin Karachiwala was born on 4th July 1970 in Mumbai. She is well-Known fitness trainer and she commenced her first studio in the city of Mumbai. In addition, she has won the award for the Best Fitness instructor at Vogue Fashion as it shows that she is one of the best fitness influencers in India who are contributing so much.

Through her social media accounts, she shares the videos of fitness which are liked by her followers and they also follow those fitness tips. Apart from this, Yasmin has also trained famous Bollywood celebrities like Katrina Kaif, Deepika Padukone.

Tarun Gill was born on 14th July in Delhi. He is always interested in fitness and gymming. Tarun Gill is a prominent marketing expert and he is the founder of TG Talks Media, which is the India’s biggest fitness media platform.

Pranit Shilimkar was born on 29th May 1994 in Pune. He is a very good example of fitness as he is 10th pass out and how he worked so hard on the fitness. Pranit’s dedication and hard work resulted in getting him with so many certifications.

He became a powerful personality and a role model for so many people through his hard work. He was the founder of FitnessTalks and he has also started his own gym as well and he also shared his fitness tips on his social media accounts which get a huge amount of love and support from his followers. Besides this, he is one of the best fitness influencers in India because of his skills.

Pranit Shilimkar is a well -known fitness instructor and he has 83.5K followers on Instagram

Shwetha Rathore was born on 13th June 1988 in Jaipur. She is very much driven to the fitness and she is the founder of Fitness Forever. Shwetha started gymming when she was in 8th standard and from where she never stops as she is so inclined towards fitness.

More importantly, she has received awards like First Indian Woman to bag a medal at the Fitness Physique World Championship. All these qualities make her an impactful personality.

Ranveer Allahbadia was born on 2nd June 1993 in Mumbai. He has also started his own Youtube Channel BeerBiceps and he is also known for his podcasts which he named as the Ranveer Show.

Besides this, on his social media account, he posts his content that revolves around fitness as this type of content keeps the audience motivated which is really good as the audience gets engaged to his content.

Ranveer Allahbadia is a powerful fitness trainer and he has 1.8 million followers on Instagram

All these fitness influencers in India are doing very good work as they have they major contribution to the field of fitness. They have won so many awards for their hard work and dedication. Apart from this they are becoming such powerful personalities because of their fitness which is so inspiring for many people. More importantly, they have taken the fitness to another level which is a huge thing. Besides this, their fitness routine is followed by their followers as they are also working so hard to reach the fitness they have.